The concert was AMAZING!

I got a ticket signed by Chris and Jaret (bfs)

and also got another ticket signed from ppl from ZebraHead and Army of a freshman way cool show! 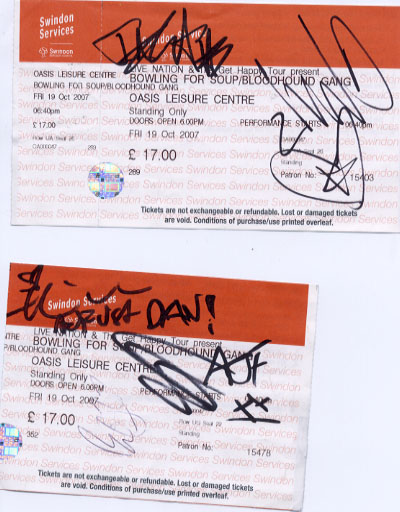 Okay i left this post for quite a bit now so ill expland alot and try and talk about some of the crap i found funny.

Was a truly amazing concert troughly loved it and cant wait to go to another.

Anyway about 4 hours of contined jumping and singing, and everyone was so lucky it was load so they couldn hear me… i ended up right at the front moshing it 😛 near the speaker 😀 😀

during the end of bowling for soup and the end of it all i couldnt hack it, they ran out of water at the front and i was erm dying. so i had to go out to get a drink right in the middle of 1985 and missed all their last songs which usually are the best 🙁 🙁

so when i finnally managed to shove my way out i get there and about half of Zebrahead said hey… and i ignored them to get a drink. i was thristy!… and i said hi once i had downed to lrg coke cups :p

amazing how sh*tty you feel when your dehydrated. 🙁

what makes the above situation (of me ignoring zebrahead) worse is when we were quing out side one of The Bloodhound Gang was going round trying to sell their album, and i just thought he was a roadie @_@ oops… i only realised just before he got on stage. ace guy tho. 😀

As i was hanging about NOT trying to stalk bfs… :p i saw something which just made me laugh.

there was the sterotypical obsessive middle aged fat bolding fan talking of the guy from zebrahead… but thats not all no this guy wasnt obsesive with ZEBRAHEAD NO he was talking about how much he loved Bowling For Soup! now is it just me who thinks, no matter how much you like the other bands which your touring with you still gonna find someone who is going on about another band a little annouying?!

what made me particularly laugh was they guy (form zebrahead) had one of those “will you just shut the F up and go away” faces every time he turned away from him.

so after standing out side the oasis, with most of bloodhound gang and army of a freshmen who were jsut standing arround having beers and smoking, until 1.30am (bearing in mind the concert finished at 11something with my mate tom who was so cold he was blue and shivering so feverishly he could barly hold the he camera phone ><

anyway i ment Chris and Jaret from bowling for soup, got photos as you can see above. and Tom kicked him self a day or so later when he suddenly thought wait a minute. why did i sit arround for 3 hours after with you and not get a photo of ME with them… silly boy tom… hehe

shame couldnt really wait arround for Gary and Erik 🙁 but  i think if i had told would definatly not have been able to defrost, and my dad would have been a bit peved if he had to sit in the car for another 2hours…

also i have a hint, ALWAYS try to pay for £1 posters with a tenner! i went to buy a small poster and only had a tenner and because he couldnt find change he just said take it :p so i got a free poster yay to me! ><

i can tell im rambling now.

I will have to have a go at posting my Mac computer review/rant soon.