Okay, so I’m an avid YouTube user. I go on it every day watch 10-50 videos a day and use the site a lot. BUT it sucks. And it aggravates me so much that YouTube which is owned and operated by THE biggest and richest Internet corporation (Google) in the world, STILL has a site with “features” which don’t work, are unwanted or are just plain crap. 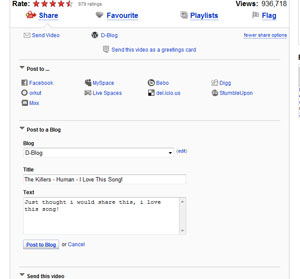 For instance, the blog feature which should enable me to “easily” post a video and text to my blog right from YouTube, which would probably mean i would end up posting tons of videos which i want to share. But no. It simply doesn’t work, from what i read on the support forums – it’s not just me. From other peoples comments it seams this brilliant feature strangely works perfectly find for Blogger (The site OWNED by Google… who also own YouTube) but not so well for others, I was trying to get it working with this blog and also a blog i set up for the Five Awesome Web Geeks (http://geeks.dansgalaxy.co.uk) but neither seems to work. Of course the best part of this story is how its not just one little feature, its all the features, there isn’t much on YouTube which works perfectly, which hasn’t been there since before google brought them out… Another example of the simply rubbish site that is YouTube is the message system. For some reason YouTube just

doesn’t want to show me the nice messages telling me that it has failed to post the video and message to my blog for and “Unknown” reason. This just bugs me so much because it is Google, the best and I expect a much much higher standard from this kind of corporation – Google CAN and SHOULD do better and are letting their users down – BADLY! There is so much which i could rant about YouTube at the moment, from the time i walked in on YouTube changing… 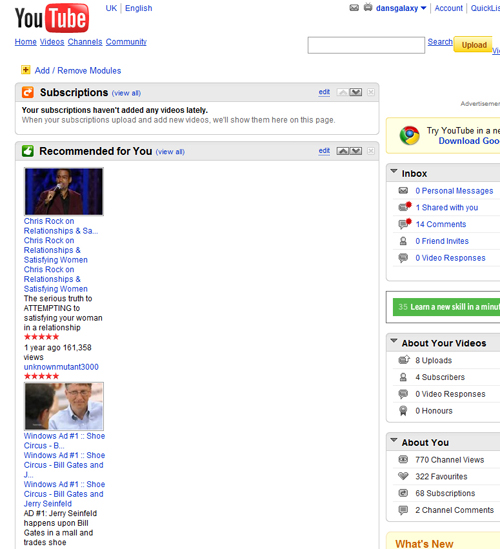 This was mid change when they played around with the time/title display for videos…     … Now me personally, i would have thought YouTube is template based… So why did i see this?! Surly the new template/style should have been done and then a single setting change and its all done?           For me the bottom line is YouTube is making a basic mistake, they aren’t testing their features. Is it really that hard for YouTube (like BBC iPlayer and many many other sites) to have a beta option? I mean what would it take for them to set up beta.youtube.com, which had a version of YouTube which included all the latest features, which would allow the users to play and test and then provide feedback and discuss the changes in a decent forum… No google groups is NOT a decent forum, vBulletin is a decent forum and if google got the feedback from its users and its beta testing right everything would improve. Users would get a better experience from properly tested features which have been proven to be WANTED by users, and of course from a publicity point of view YouTube wouldn’t have people like me moaning about the poor service.

Rant Over… You May Resume Normality.

Just had a thought as to the message and possibly other problems, could it be poor co-location techniques? For instance most geeks should know that YouTube is obviously not hosted on one server (in fact is uses Google HUGE server farms on many continents in many countries), and now as soon as you type in Youtube.com you get directed to the local version for me that’s uk.YouTube.com, but even then i know that its not one server for the whole UK, and now i am thinking i need to make my point because i am waffling. My point is that the messages do (eventually) appear in my inbox, usually about 4 hours plus after it tells me i have new messages, so could it be that the site gets the new message information from one server while the messages have not yet been synced to the server i connect to to view the message page?

Personally i think its unlikely, as i would have thought google wouldn’t have this issue… then again some of the bits i pointed out above suggest they may not be running things as best as possible…