Hmm, was just on my twitter page and it wasn’t showing my update total, so naturally i took a screen shot. 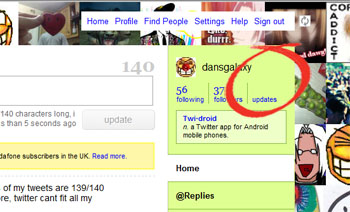 However they seem to be back now! yay! (at presenter i have tweeted 1,413 times.

And im sure theres a lot more to come!

I don’t usually comment much about twitter, although i really should talk more about it. Particularly as it is fast becoming a very big part of mine and thousands of other peoples daily Internet lives, twittering every thought, meeting and encounter. It really is rather interesting how things like this can completely change people daily lives and out looks at the world around them… and the rest of us by simply sharing what we do with the world.

Also i am sure people have noticed that the few posts i have done in the past couple of months have been me having a rant about YouTube which mainly is because YouTube is a big part of my online life and where i am getting a lot of my content both news, and entertainment from, as well of as course all my news feeds on my iPod which has increased my news consumption ten fold since getting it, i love it.

I have also started a new project online, which i won’t talk about much hear as i plan on devoting a whole post to it, hopefully will be fun, and already it seems pretty cool ^^.

Now to talk about the main topic of this post!

Vlogging every day in April

vlogging every day in April, I thought i would give it ago, so seen a few people talking about the challenge of making a vlog everyday in April, and as i want to make more YouTube videos it sounds like a plan, so i hope to be interesting…

Its all good, and definitely a bit of fun, that’s life i suppose.

Night all, or should that be morning?