I thought I should make a post to shout about the system I am currently developing (Currently in Alpha) which is an alternative SMS to Twitter system – eg. You text TW followed by your message and that gets tweeted out on your Twitter account.

Now firstly I will explain WHY I have made this because I know lots of people might think, why bother, twitter already have that!

But alas, not quite. Twitter does have a UK text number, however it has a rather irritating downfall, its a Isle of Man number… so on some networks – like mine T-mobile – which do not have any special deals for the twitter number it means texting this number isn’t included in your SMS allowance and is charged at International Region 1 rates, which is 25p/SMS last time I checked! Which is a lot more than the 3 – 10p PAYG customers might pay, and a damn site more than the cost of unlimited texts.

So now you know the reason, texting this number is cheaper for some people because its properly UK based.

Now for a little bit of tech.

The way the Alpha system is currently working is very bare-bones; there is currently no front end at all and it is purely based on 2 cron jobs working with 2 databases. 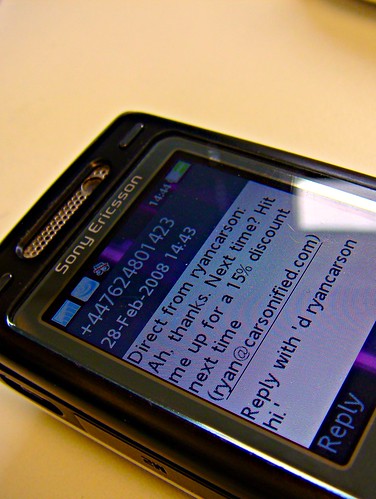 My aim is to develop the system so it has a SMS Api/Gateway core, which is the part of the system which interfaces with the actual SMS gateway I am working with, so this runs and grabs all new SMS messages on my account and stores them to the core database.

I then have the SMS to Twitter part or App which then interfaces with the core system, to retrieve and process SMS messages for tweeting.

So as the text system is based off keywords eg, SMS must start with “Tw” or “dansgalaxy” to be picked up, so I register all the keywords with the gateway, and then the core system picks up all the SMS for my account picks out all the info and dumps it into a database so i can easily find and process the SMS and then you have Apps which can interact with the core database to use the SMS.

So currently the SMS to Twitter system is based on a keyword of “tw” so the App authenticates with my core system, and is then able to retrieve the SMS messages which uses the keyword of “tw”.

The system then checks the information for the SMS, picks out the senders phone number, which is then looks up in database to and finds the account holder, and is then able to tweet the users SMS using Twitter Authentication details stored in the database.

Because the system is in Alpha, currently it is very basic however I have great plans for this system and hope I can develop it into a full system where users who wish to use it can sign up authenticate the system with their Twitter account using OAuth instead of the username/password combination and enjoy a simple tool. 🙂

All thoughts and suggestions welcome.