So I noticed a shiny new feature the other day on YouTube, the ability to pop out the video or to “Watch this video in new window” on certain videos.

Now so far the only video I have come across using this feature is a 1:05:37 long talk from Vint Cerf  and amazingly, I have yet to find a bug… and there’s only 1 improvement i would like to see at the moment.

So on videos using the feature you see a little TV shaped square with an arrow pointing into the top right corner right next to the Turn Down the Lights button.

When you click this it pauses the video on the main page and loads the video in the pop-up as you can see below. 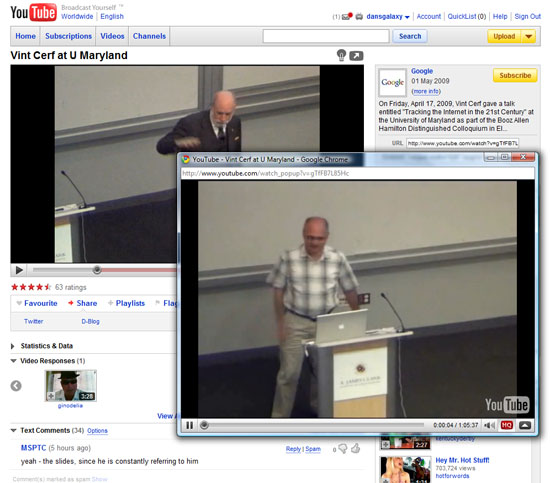 This seems to work pretty well and is a nice little idea, but it can be taken further, now i have been watching this hour long talk and i want to watch the video in a new window after 20 minutes and the pop-up opens and starts playing from the beginning, which isn’t a massive deal but it would be a lot easier if it resumed from where you were watching, like BBC iPlayer can.